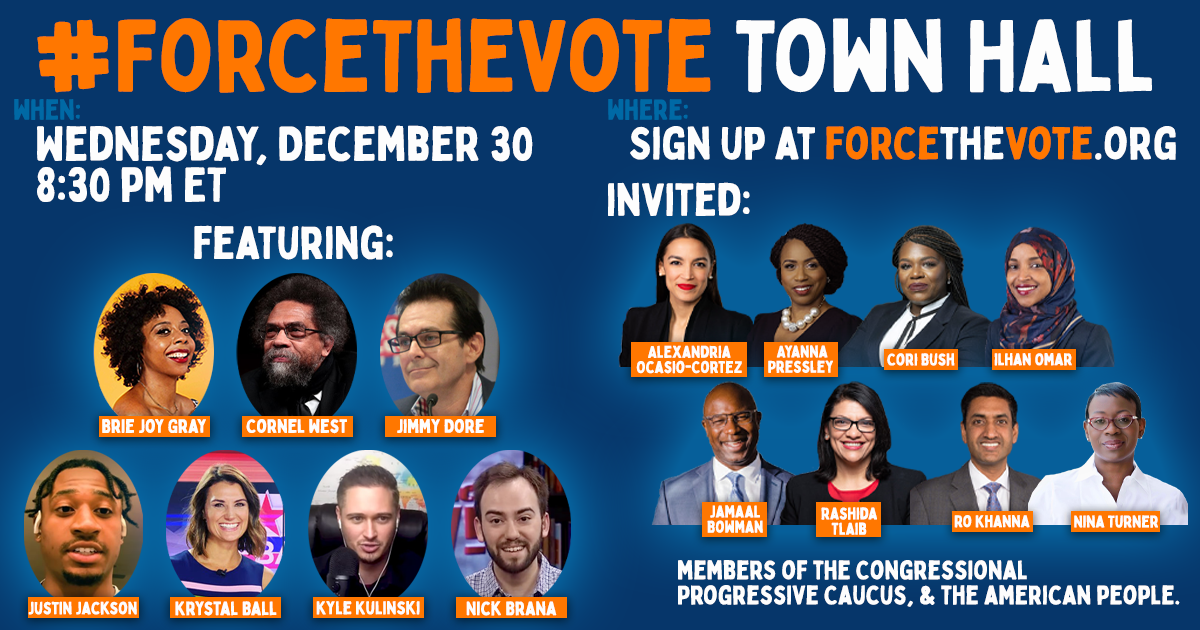 Tens of millions of Americans are struggling without health care in the middle of a pandemic and we have a fleeting opportunity to bring Medicare for all to the floor of the House for a vote. Medicare for all is overwhelmingly popular and forcing the vote has enormous support in the progressive movement. Please join thousands of your biggest supporters to discuss #ForceTheVote.

We invite you to join us at a live town hall meeting on Wednesday at 8:30 pm ET to discuss forcing a vote on Medicare for all.

Rep. Nancy Pelosi is running for her fourth term as Speaker of the House. The election is in the first week of January and this time, because Democrats lost seats in the House and were left with a slim majority, she needs votes from congressional progressives to get re-elected. ​

Pelosi is refusing to bring Medicare for all to the floor of the House for a vote in the middle of a pandemic that has killed 300,000 Americans.

This is the worst health crisis in a century and millions have lost their employer-based coverage. Seventy-two percent of Americans want Medicare for all and every other major country on Earth guarantees health care to all people as a right.

Democrats ran under the banner of “healthcare is a human right,” but it’s easy to campaign on or sponsor legislation that will never come up for a vote. A vote on Medicare for all will prompt a national conversation on guaranteeing health care in the middle of a pandemic. It will show the country who really supports it, not just rhetorically, but in practice. Then we can hold our representatives accountable.

We put the Squad and House progressives in office to stand up to Nancy Pelosi, establishment Democrats, and the insurance corporations that fund them. This is a rare moment where Pelosi needs something from progressives. It could be years before we have another chance and millions of people do not have that long.

This country needs Medicare for all now. A floor vote is the absolute least we must demand. We want a vote on the last full week of January, after Biden is inaugurated. The progressive movement has shown huge support for this campaign and we want to know: Will you stand up to Democratic Party leadership when we need it the most?

Petitioning every member of the Congressional Progressive Caucus

AZ Roots Politics Calendar is your gateway to Civil Rights and Progressive politics across Arizona, connecting you to hundreds of AZ Grassroots & Democratic organizers.

All events are interactive, linking you directly to the organizer’s website or Facebook page. In the Month, Map, & Filter Events views you can search by city, topic, or keyword.